Skip to the content
Home > Insurance Blog > Flood Insurance Rate Increases: Who Will Be Affected? 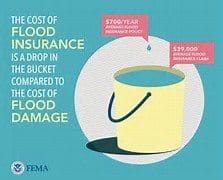 April 1, 2017 brought the implementation of rate increases for flood insurance policies pursuant to the Biggert-Waters Flood Insurance Reform Act of 2012 and the Homeowner Flood Insurance Affordability Act of 2014. Premium increases are the result of the current deficit the NFIP is in, roughly 20 billion dollars. In addition to being an effort to raise the funds the NFIP needs to respond to flood disasters, the program is also working towards being actuarially sound with policies being charged for the risk they actually pose.  These increases will continue on a yearly basis until the policy premium reflects the level at which it should be.

While the increases listed below may seem high, only roughly 20% of all policy holders in total will see rate increases, as an estimated 80% of policyholders were already paying an appropriate premium for the level of risk their property poses.

The increases described below apply to policies that were both previously heavily subsidized by the government and rated without an elevation certificate.  The estimated increases are 25%, 14% and 9%. These increases include all fees and surcharges in addition to premium increases.

The following groups of flood policyholders will see the steepest increases of up to 25%:

Properties that were remapped from a low to high risk will see an increase of 14%.

The rate increases for the following groups of policyholders are not as steep and will remain around 9%:

Some policyholders may be tempted to not renew their flood policies based on the increases, however, FEMA strongly recommends against this action for several reasons.  Firstly, cancelling the policy will put the policyholder in a position to not be grandfathered in to more favorable rates, should their property be classified into a higher risk bracket in the future.  Secondly, cancelling the policy will leave homeowners unprotected during the spring flooding season.

In short, the increases are not affecting all flood policyholders.  For those it is affecting, the increases are correcting unsustainable discounts to those policies.  It is advisable to not abandon the renewal of flood policies as this is one of the most useful tools property owners have to repair flooded properties.

They have provided me with quality insurance at a very reasonable price.Juan C.
RW
They are a pleasure to work with and always have my companies back.Rachel W., Legendary Therapy

I have always had good communication with questionsSam- P., Perel Properties

You always take the time to answer questions and explain everything fully.Pat C., Edison, NJ
M
It is reassuring to know that Beckerman & Co. is there for us when we need.MJ, Great Neck, NY
See All ReviewsSee All Reviews